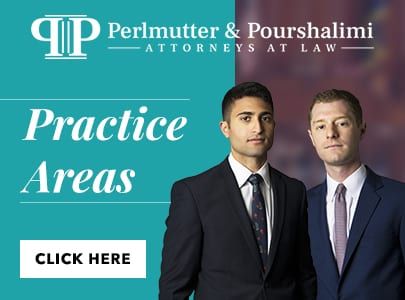 For an aggressive defense, choose Perlmutter & Pourshalimi as your hit & run defense attorney

California’s hit and run law is very strict, making it illegal to drive away from any accident involving property damage or injury to another party without first identifying yourself. Many people end up breaking the law unintentionally because they do not realize that they need to stop even if the accident was not particularly serious and/or even if they were not at fault. Some examples of this kind of misdemeanor hit and run offense include:

Of course, there are also other cases in which a driver deliberately flees the scene of a serious accident to avoid punishment for DUI, reckless driving, driving without a license, or some other issue. Fleeing the scene of an accident likely to involve a serious injury or death is a felony hit & run crime.

A hit and run accident is no ordinary accident, and you should not treat it like one. Instead, you need to get an aggressive hit & run defense attorney on your side right away. At Perlmutter & Pourshalimi, we will fight aggressively to secure the most advantageous resolution possible to your case. This may involve implementing one of the following common hit & run defense arguments:

Why Choose Perlmutter & Pourshalimi as Your Hit & Run Defense Attorney

At Perlmutter & Pourshalimi, we will not give up on your case, no matter how daunting the evidence against you may seem. As former prosecutors ourselves, we know how to undermine and disprove the prosecution’s arguments to prevent a conviction for hit & run. We will intervene early and aggressively in your case with the goal of getting charges dismissed before trial, but we are definitely not afraid to represent you in court if needed. We have an excellent track record in jury trials. If and only if a plea deal really is in your best interests, we will make sure the prosecutor offers the most lenient deal possible.

As soon as you realize you may be accused of leaving the scene of a car accident, you need to call a hit & run defense attorney. We’re here for you 24/7 at 310-295-2236. Call us now for a free consultation and immediate help.